Before reading this page, it is highly recommended you read the Variables, Objects & Expressions page.

Variables store dynamic values which can be used during the build process. A full description and further conceptual information can be found on the Variables, Objects & Expressions concept page.

This page discusses information regarding the hands-on use of variables.

Each variable must be assigned a type which limits what time of information can be stored in a variable. Note that all variable types, except expression variables, can have their values changed during the build process.

A full list of variable types can be found on the Variable Types page.

All configuration variables can be assigned a prompt type which enables users to set a variable's value when queuing a manual build.

Configuration Variables can be given the following prompt types:

Read the Variable Prompt Types page for more information on these prompt types.

Variable namespaces control where a variable exists within the Continua CI environment. Namespaces also provide variables with a scope which limits what each build can access. For example, if you create a configuration variable then only builds from that configuration can access that variable.

Continua uses a namespace hierarchy (as shown below) to determine which variable value should be returned when no namespace has been defined. Read the Variable Namespace Hierarchy section on the Variables, Objects & Expressions concept page for a closer look at how the Continua hierarchy works.

Build variables belong to a specific build however they cannot be created manually. They are used to override any of the variables listed below. See the next section for more information on how build variables work. Build variables can be accessed with the %MyVariableName% syntax (Note that you cannot use the Build namespace prefix).

Project Variables can be created, modified and deleted through the Project Wizard.

Application Variables can be created, modified and deleted through the Variables page in the administration section. 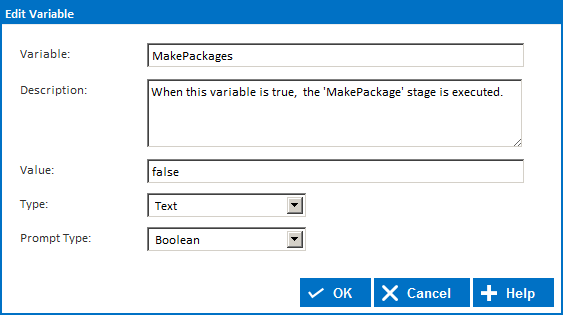 For demonstration purposes, the mock Configuration this variable belongs to has two stages. Stage 1 builds my project and out puts a bunch of file. Stage 2 takes the output of Stage 1 and generates an installer (a.k.a makes the packages). I don't want to make the packages every time I execute the configuration though so I've setup the configuration to only execute stage 2 when the MakePackages configuration variable is set to true. By making this a prompt type variable, I will be able to supply the value of this variable whenever I manually start a build. When I manually start a build, I will see the following dialog. 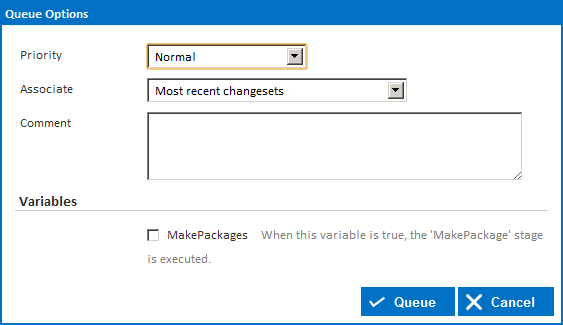 In this example, I've created a variable called TagBuildAs and set it to a Selection prompt type. This type of prompt type will display a text field in which you supply all the possible values for this variable. The value you supply in the Value field must be in the list of values you supply in the Options field. 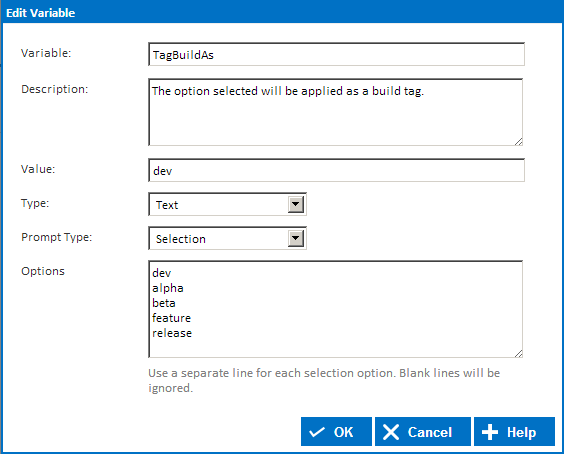 For demonstration purposes, the mock Configuration this variable belongs to has a Tag Build action which contains the value %TagBuildAs% as one of its values. This means the build will be tagged with whatever value the variable TagBuildAs contains. By making TagBuildAs a selection prompt type variable, the user can select which value to use when manually starting a build. If you were to manually start a build, you would see the following dialog. 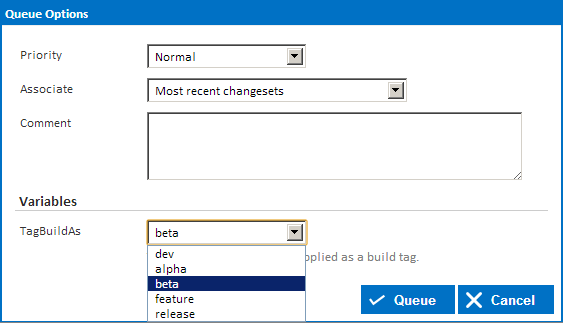 Now when you start a build you can specify the value from the drop down list.

In this example, I've created a variable called AgentsToRunOn and set it to a Multiple selection prompt type. This type of prompt type will display a text field in which you supply all the possible values for this variable. The value you supply in the Value field must be in the list of values you supply in the Options field. 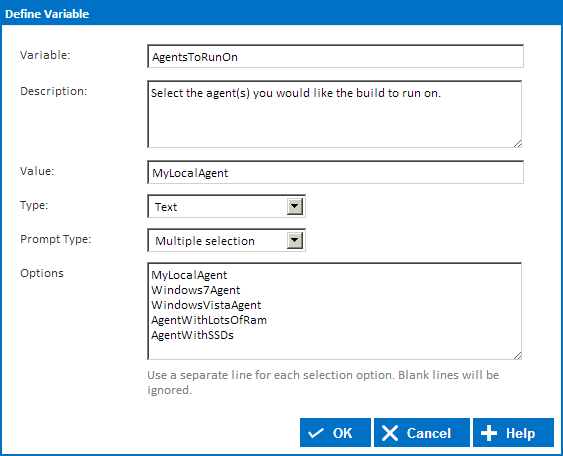 As a result of this prompt type variable, you will now see each agent name with a checkbox next to it when you manually start a build. 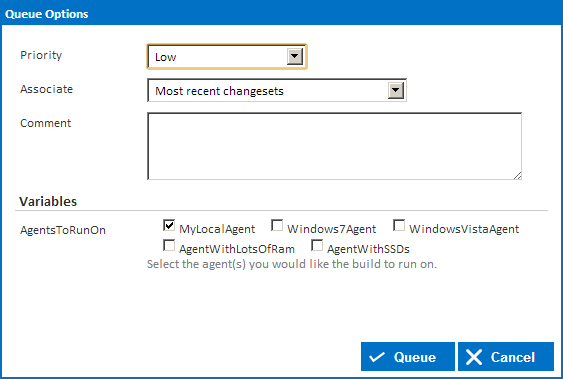 For demonstration purposes, the mock Configuration this variable belongs to has a check before each stage (using Agent Requirements in Stage Options) that checks to see if the Agent's hostname is in the list of options you selected when the build was manually started. Here's an example of what a stage might look like with this kind of agent requirement. 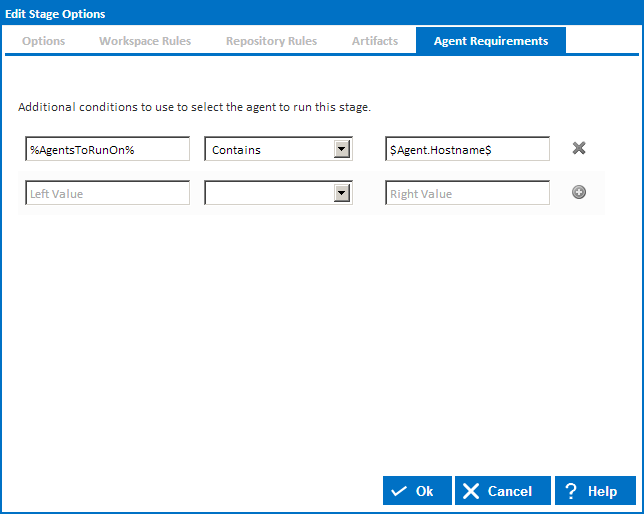 At build time, %AgentsToRunOn% will contain every value you ticked on the queue dialog, in other words, every agent host name you specified. By selecting the Contains operator then specifying the expression $Agent.Hostname$, you're basically saying "Only run this stage when the list of agents I selected on the queue dialog contains the name of any agent registered with Continua".