The Git Clone Repository action allows you to clone an existing git repository into a new directory. This action is a wrapper for the git command line. For more information on the use and options for this action, refer to the git clone command line documentation.

To clone a remote repository,  you need to specify a working directory and the URL of the repository to clone from. The destination directory cannot already contain a repository, otherwise the command will fail. 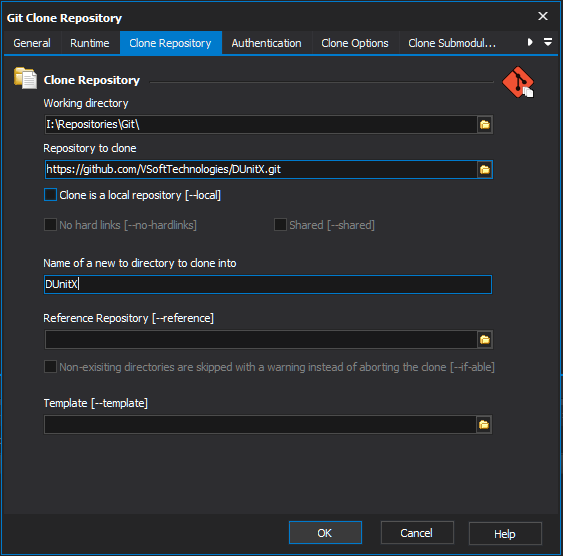 Working directory - The directory to run the command line form.

Clone is a local repository - When the repository to clone from is on a local machine, this flag bypasses the normal "Git aware" transport mechanism and clones the repository by making a copy of HEAD and everything under objects and refs directories.

No hard links - Force the cloning process from a repository on a local filesystem to copy the files under the .git/objects directory instead of using hardlinks. This may be desirable if you are trying to make a back-up of your repository.

Shared - When the repository to clone is on the local machine, instead of using hard links, automatically setup .git/objects/info/alternates to share the objects with the source repository. The resulting repository starts out without any object of its own. NOTE: this is a possibly dangerous operation; do not use it unless you understand what it does.

Template - A directory containing templates will be copied to the .git directory. The template directory can include some directory structure, ignore patterns and hook files.

If your repository is private you will need to enter credentials on the Authentication tab. 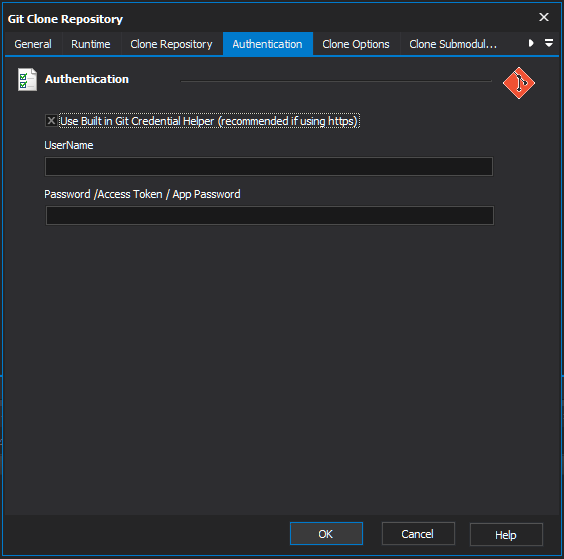 We recommend that you use the built-in credentials helper to pass the credentials to the command line when connecting to the remote repository using an HTTPS.

There are many options that can be set to control the cloning process. 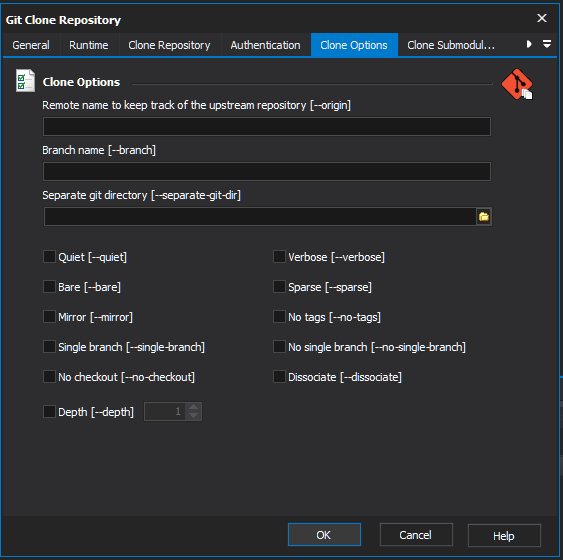 Branch name - Name of branch to point to (or checkout) in the cloned repository instead of pointing to the HEAD branch.

Separate git directory - A directory to place the cloned repository in which is separate to the working tree.

Bare - Rather than place the administrative files in the .git folder place then in the root destination directory. This implies that there is no checkout because there is nowhere to check out the working tree.

Sparse - Employ a sparse-checkout, with only files in the top-level directory initially being present.

No tags - Don’t clone any tags or include tags in subsequent fetch and pull commands.

Single branch - Clone only the history leading to the tip of a single branch, either specified by the --branch option or the primary branch remote’s HEAD points at.

Single branch - Clone only the history leading to the tip of a single branch, either specified by the --branch option or the primary branch remote’s HEAD points at.

No checkout - Do not checkout the HEAD once the clone has completed.

Dissociate - Borrow the objects from reference repositories specified with the --reference option only to reduce network transfer, and stop borrowing from them after a clone is made by making necessary local copies of borrowed objects.

Depth - Limit the resulting repository to the specified number of revisions to create a shallow repository.

Shallow repositories have a number of limitations that users should be aware of before using this option.

There are also some options which control how submodules are dealt with. 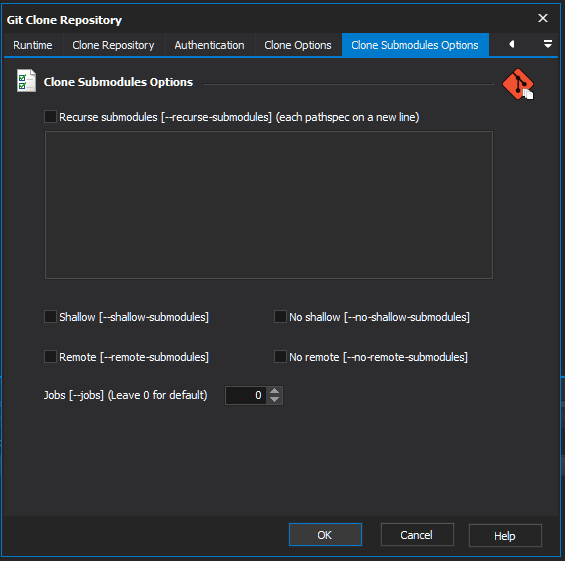 Shallow - All submodules which are cloned will be shallow with a depth of 1.

No shallow - Ensure that full submodule history is cloned regardless of other settings.

Remote - All submodules which are cloned will use the status of the submodule’s remote-tracking branch to update the submodule, rather than the main repository’s recorded SHA-1 hash.

No remote - Ensure that the main repository’s recorded SHA-1 hash to update the submodule regardless of other settings.

Jobs - The number of submodules to fetch at the same time.