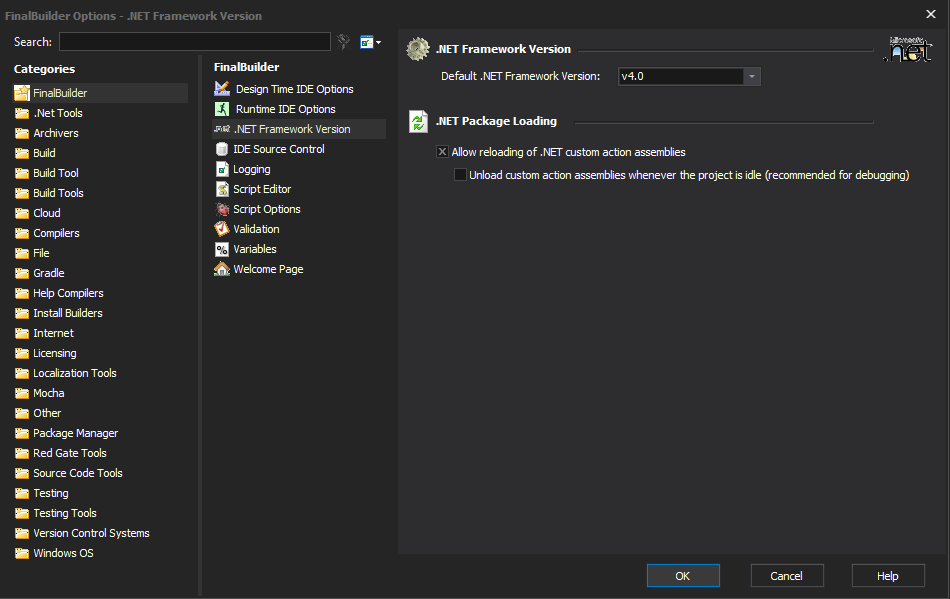 This is used by .Net Framework Tools and .Net SDK Tools (and other .NET actions) as the default .NET version for the tool they relate to.  The .NET version can be changed on an action by action bases for these tools.

All .NET versions are supported for tool actions.

In addition the option specifies the CLR version that is loaded.  This is used by Custom User Actions and some included actions written in C#. Currently a minimum version of .NET 4.0 is required due to the features being used in the running of certain actions.

Checking this option allows FinalBuilder to reload assemblies required by custom actions implemented in .NET.  Reloading will take place automatically when an action package is saved in ActionStudio, or from the Package Manager dialog.

Unload custom action assemblies whenever the project is idle

Checking this option means that FinalBuilder will unload custom action assemblies when FinalBuilder is idle.  For example, after a build has completed or when the action properties dialog has closed.  This allows for easier debugging of custom actions being built using Visual Studio and Action Studio as FinalBuilder only holds the binary while it needs to.