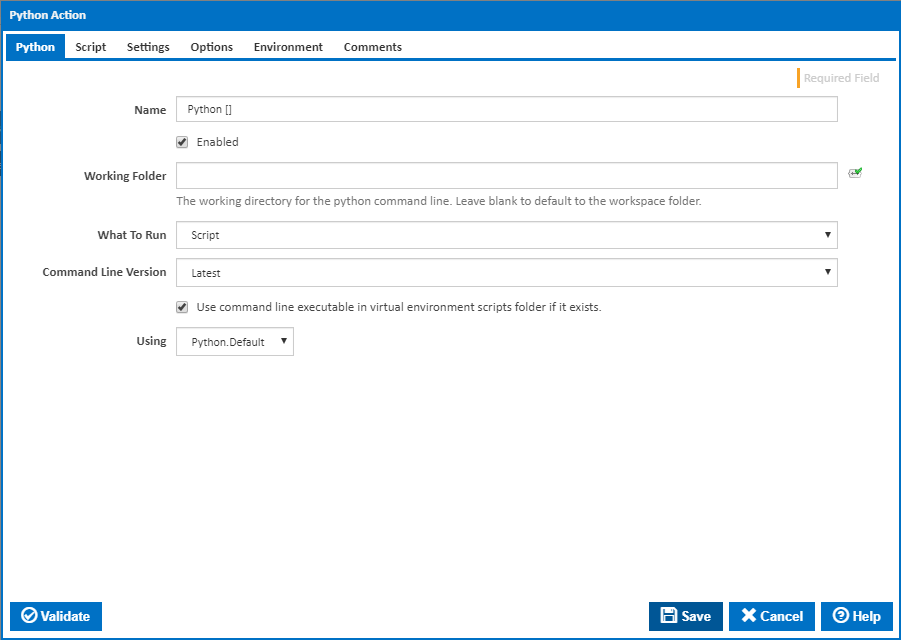 The working directory for the python command line. Leave blank to default to the workspace folder.

Select what to run. The relevant fields are located in their respective tabs.

Select the version of the Python command line that is installed on the agent. Some other settings and options may be unavailable depending which the command line version is selected.

Use command line executable in virtual environment scripts folder if it exists.

If this is ticked and exists, the python executable in the virtual environment scripts folder will be used instead.

If you create a property collector for this action, make sure you select the Path Finder PlugIn type and give it a name that will match the pattern above in blue. Example names listed here, search the table's Plugin column for "Python".

Alternatively, you can select the Custom option from the Using drop down list and specify a path in the resulting input field that will be displayed. Please read Why it's a good idea to use a property collector before using this option. 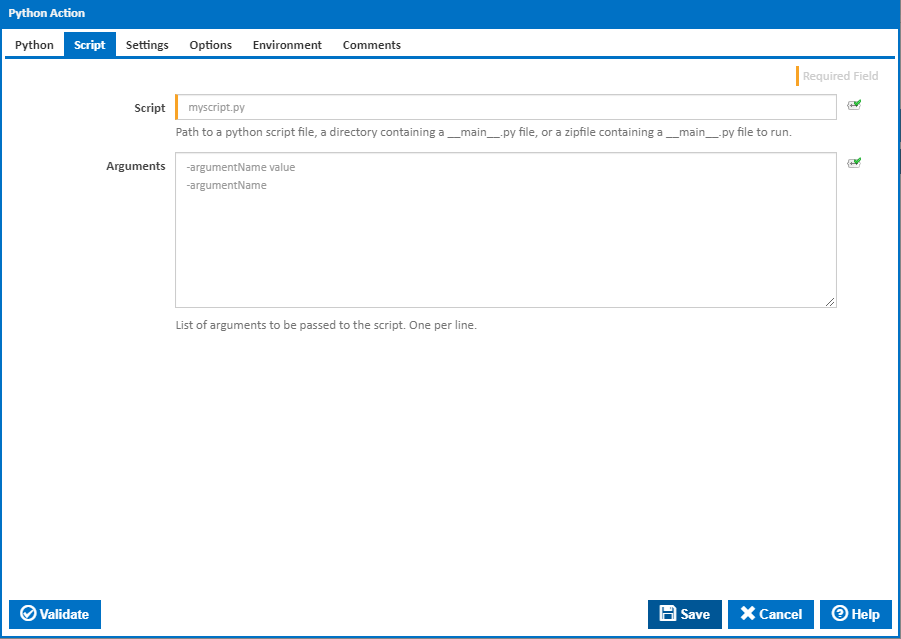 List of arguments to be passed to the script. One per line. 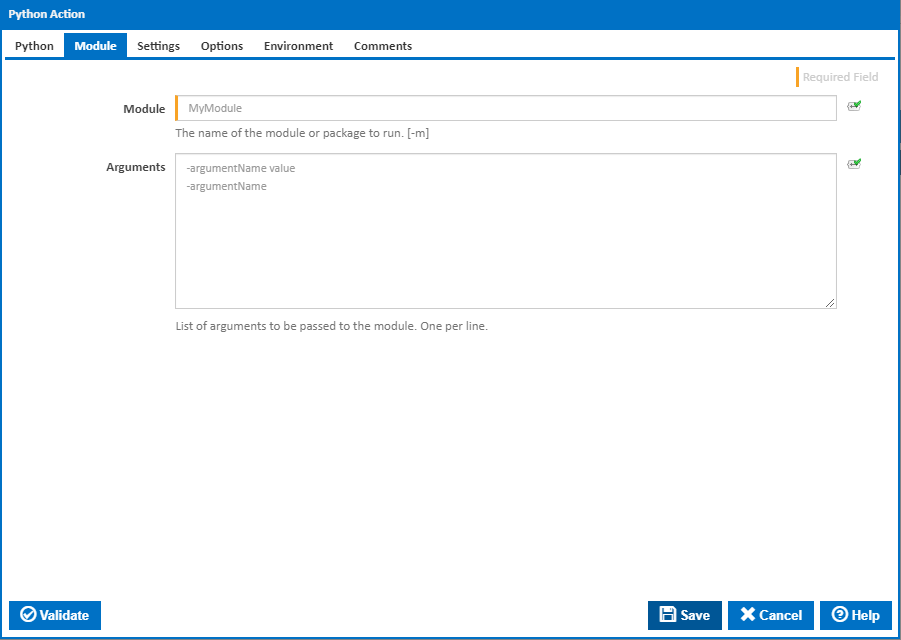 The name of the module or package to run. [-m]

List of arguments to be passed to the module. One per line. 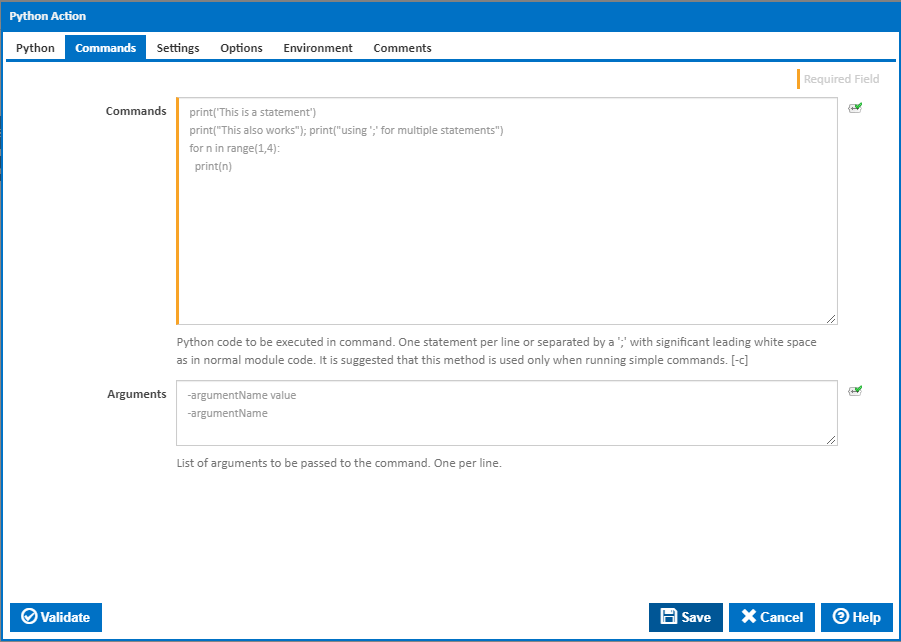 Python code to be executed in command. One statement per line or separated by a ';' with significant leading white space as in normal module code. It is suggested that this method is used only when running simple commands. [-c]

List of arguments to be passed to the command. One per line. 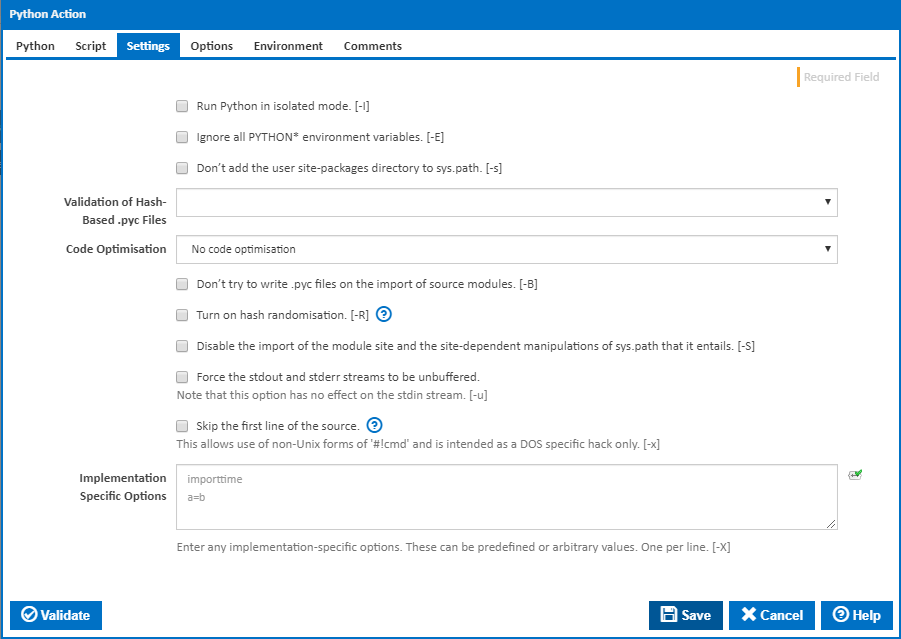 If this is ticked, Python is run in isolated mode. [-I]

Visible only if the checkbox 'Run Python in isolated mode' is NOT ticked.

If this is ticked, all PYTHON* environment variables are ignored. This is implied if python is run in isolated mode. [-E]

Visible only if the checkbox 'Run Python in isolated mode' is NOT ticked.

If this is ticked, the user site-packages directory is not added to the sys.path. This is implied if python is run in isolated mode. [-s]

Control the semantics of division. [-Q]

Note that this option is only available in Python version 2.x.

Select the level of code optimisation.

Don't try to write .pyc files on the import of source modules.

If this is ticked, Python won’t try to write .pyc files on the import of source modules. [-B]

If this is ticked, hash randomisation is turned on. [-R]

Note that this option only has an effect if the PYTHONHASHSEED environment variable is set to 0, since hash randomisation is enabled by default.

Disable the import of the module site and the site-dependent manipulations of the sys.path that it entails.

If this is ticked, the import of the module site and the site-dependent manipulations of sys.path that it entails is disabled. Also, the manipulations are disabled if site is explicitly imported later. [-S]

Force the stdout and stderr streams to be unbuffered.

If this is ticked, the stdout and stderr streams are forced to be unbuffered. [-u]

Skip the first line of the source.

If this is ticked, the first line of the source is skipped. This allows the use of non-Unix forms of #!cmd. This is intended for a DOS specific hack only. [-x]

Note that, with this option ticked, line numbers in error messages will be off by one.

Enter any implementation-specific options. These can be predefined or arbitrary values. One per line. [-X] 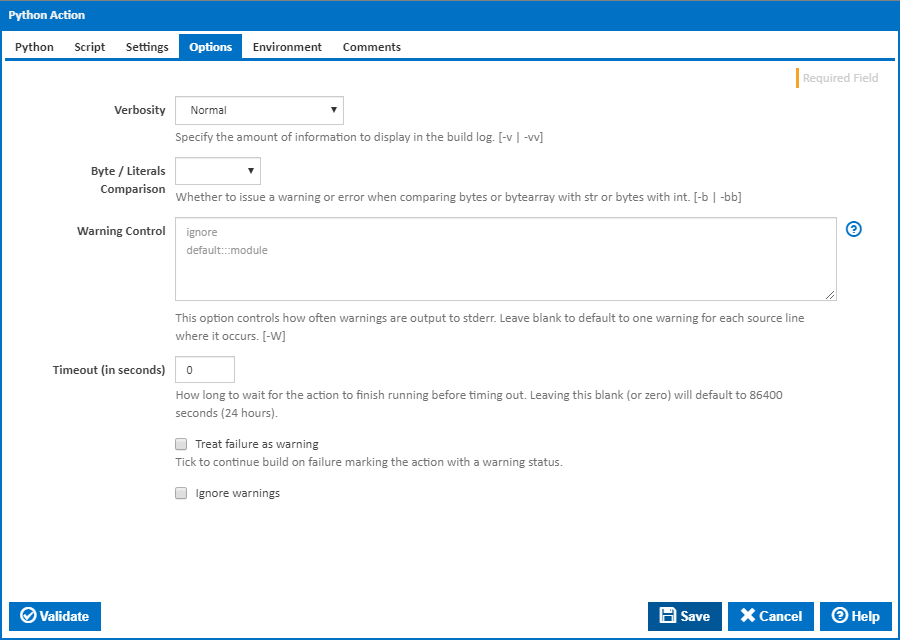 The amount of information detail to display in the build log. [-v | -vv]

Whether to issue a warning or error when comparing bytes or bytearray with str or bytes with int. [-b | -bb]

Select whether to issue a warning or error when a source file mixes tabs and spaces for indentation in a way that makes it depend on the worth of a tab expressed in spaces. [-t | -tt]

Note that this option is only available in Python version 2.x

This option controls how often warnings are output to stderr. Leave blank to default to one warning for each source line where it occurs. [-W]

Multiple options may be given; when a warning matches more than one option, the action for the last matching option is performed. Invalid options are ignored (though, a warning message is printed about invalid options when the first warning is issued).

The simplest form of argument is one of the following action strings:

The full form of argument is: action:message:category:module:line

For more information, please refer to the warnings module in the python documentation.

If this is ticked, a 'DeprecationWarning' is emitted for features that are removed or significantly changed in Python 3 and can’t be detected using static code analysis. [-3]

Note that this option is only available in Python versions 2.6 and 2.7.

How many seconds to wait for the action to finish before timing out. The default is 86400 seconds (24 hours).

Tick to continue build on failure marking the action with a warning status.

If this is ticked, any warnings logged will not mark the action with a warning status. [-W] 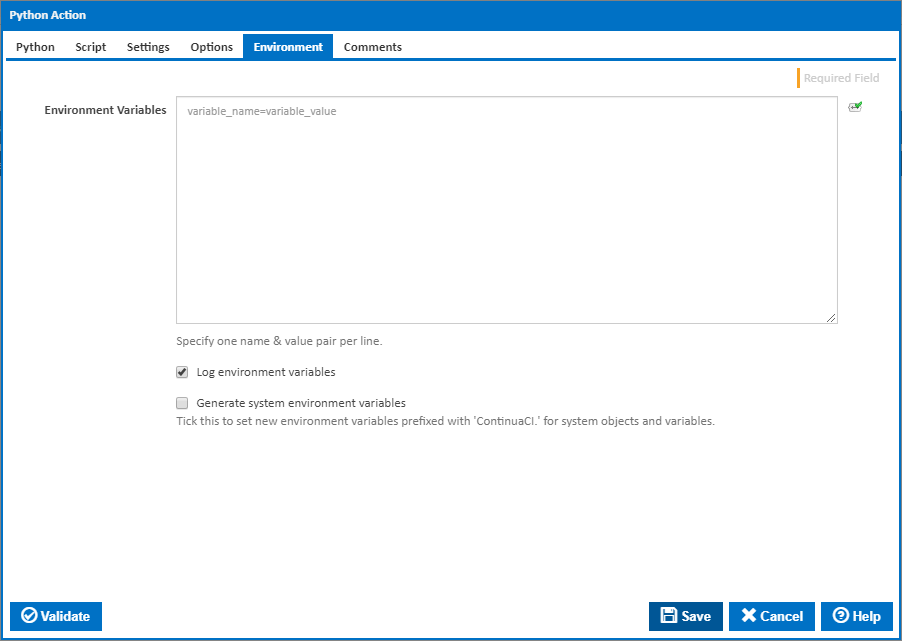 Multiple environment variables can be defined - one per line. These are set before the command line is run.

If this is ticked, environment variable values are written to the build log.

Tick this checkbox to set up a list of new environment variables prefixed with 'ContinuaCI.' for all current system expression objects and variables.

This checkbox is visible only if the 'Generate system environment variables' checkbox is ticked.

If this is ticked, the values of any variables marked as sensitive will be masked with **** when setting system environment variables. Clear this to expose the values.