Variables in FinalBuilder are the key to making your builds dynamic. Variables can be used in almost every text property of every FinalBuilder action, for example in fields that specify file paths, directories etc. 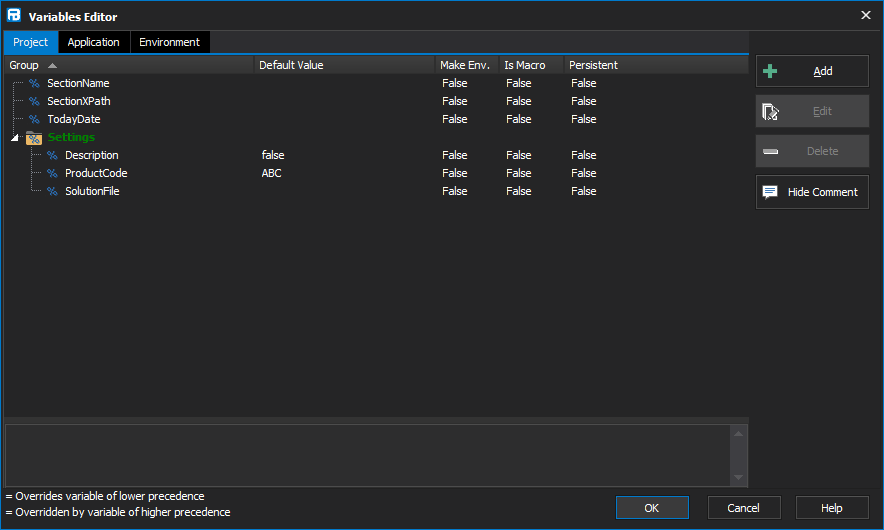 Project and User Variables can be made available as environment variables to applications that are executed by FinalBuilder.  That is, if you create a variable MYVAR and set the "Make Env." flag, a command shell action could access it as %MYVAR%.

The Is Macro flag forces FinalBuilder to re-evaluate the variable by expanding the Default Value, whenever that variable is referenced during the build. This is particularly useful for variables that are used in scripting: whereas most actions automatically expand all variable references, regardless of the "Is Macro" flag, this does not happen in script events. If you set this flag, however, any contained variable references are automatically expanded.

For example, you can make a "Buildpath" macro variable that contains "%BuildHome%\FinalBuilder\%BuildName%". Each time it is accessed, whether from script or an action, it will expand to the current value of those variables.

Persistent variable values are stored in .fbpinf files. Each fbpinf file has the same name as the FinalBuilder project (to persist variables, FinalBuilder needs write access to the directory containing the project and the ability to create or write to the .fbpinf file).

In the following example, the variable "ObjName" is in the group "BuildVars.Debug". 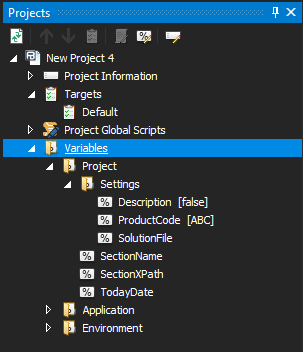