The Native Image Generator (NGen 2.0) Install Action enables the creation and installation of a native image for an assembly and its dependencies. Assemblies with native images run faster on the current machine because they can bypass the .NET Just-In-Time compiler. 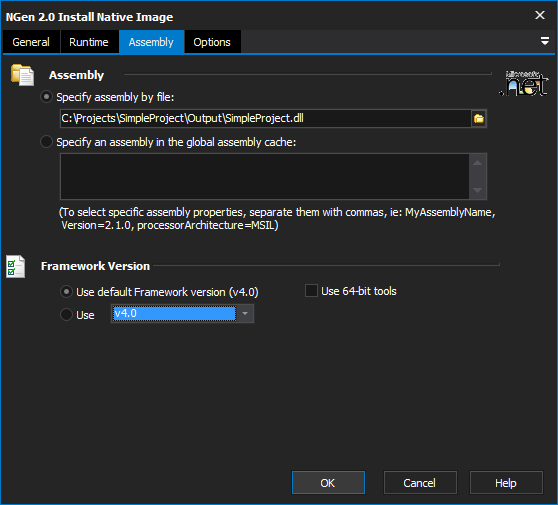 Enter the explicit path of an assembly to precompile.

Specify an assembly in the global assembly cache

Specify the full display name of an assembly in the global assembly cache. Separate extra properties with commas.

Allows the selection of the .NET version to use for the tool. The minimum is .NET v2.0. 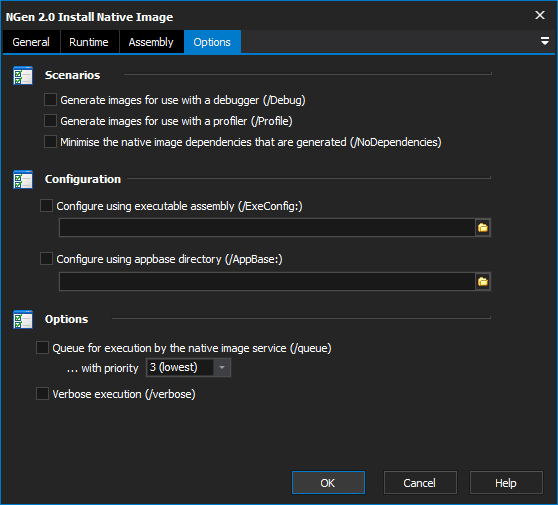 Generate images for use with a debugger

If this option is turned on debug information is included in the generated image.

Generate images for use with profiler

If this options is turned on a profiler will be able to load the generated image.

Minimise the native image dependencies that are generated

If this option is turned on the native image will be generated with a minimum of dependencies.  This is not recommended because non-native dependencies will cause the Just In Time compiler to be invoked, negating the benefits of Native Images.

The assembly configuration can be taken from an executable configuration.  This allows NGen to get a better idea as to what dependencies would be loaded by the assembly.

The directory to use as the application base when locating dependencies for the supplied assembly.

Queue for execution by the native image service

Rather than installing directly, the generation and installation can be queued for execution by the Native Image Service. There are three levels of priority lowest, normal, and highest.

Includes the maximum amount of information while generating the native assembly. Useful for debugging issues with the action, does slow down generation however. Therefore we recommend turning this off during normal script runs.

Toggle All | Expand All | Collapse All