In this example the Action will be dropped After the action above the line, because the guide line indicators point up.

Actions can be moved using Drag and Drop, or using the Arrow buttons on the Actions Toolbar.

You can also use the Ctrl+Arrow keys to move actions up and down or to indent/outdent actions.

Any Action (apart from Comment actions) can be a parent to other actions.  When an Action has child Actions, it executes first, and then if it succeeds then the child actions execute.

Actions can be copied and pasted using the clipboard, in which case the actions are pasted after the currently selected Action. You can also use Drag and Drop with the Control Key down to copy the dragged Actions.

To delete an Action, select it and press the delete key, or use the Delete button on the Actions Toolbar.

You can select which columns are shown in the Action List view by right clicking on any column header. 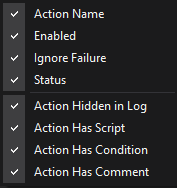 Shows the underlying name of the action, such as "Action Group" or "List Iterator". Useful if you frequently rename

Shows a checkbox allowing you to quickly enable or disable actions.

Shows a checkbox that specifies whether execution continues even if this action fails. See Ignore Failure.

Shows a coloured bar indicating statuses such as "Completed" or "Error".

Shows an icon if the "Hide action from log" action property is set.

Shows an icon if there is a script event attached to the action.

Shows an icon if there is an execute condition defined on the action.

Shows an icon if the action has text in the comment field.